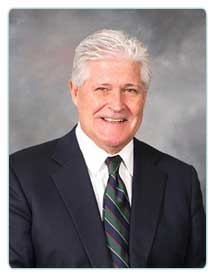 NMC pays tribute to Kenneth H. Ott, M.D., F.A.C.S. for his long medical career by bestowing upon him the status of Physician Emeritus.

Dr. Ott practiced neurosurgery for 43 years in San Diego, joining NMC following his residency at the Massachusetts General Hospital, Boston in 1976. Prior to residency he attended Yale University and U.C. San Francisco School of Medicine.

Dr. Ott’s areas of special interest were minimally invasive forms of neurosurgery such as outpatient microlumbar discectomy and anterior cervical discectomy; Gamma Knife Radiosurgery, as well as Cyberknife and Brainlab Novalis radiosurgery.  He had much interest in image-guided and frame-based stereotactic surgery; functional neurosurgery for Parkinson's disease and other movement disorders; endoscopic sympathectomy for hyperhydrosis as well as pituitary surgery; brain tumor surgery was a significant portion of his practice.

Dr. Ott retired from NMC in December 2019.  We thank you for your service and dedication during your working years at NMC.

LIMITED OPERATIONS DUE TO COVID-19

We are safely open and practicing social distancing. Due to COVID-19 we are limiting our operations to essential and emergent appointments only.

To protect our patients and our staff we ask if possible, please come to your appointment alone. If you are unable to attend alone, please bring along one other healthy person.

If you are scheduled for an appointment and are experiencing any of the following symptoms or scenarios, please call us to reschedule your appointment.

We appreciate your compliance to these rules in order to protect the health and safety of our patients and staff. We hope to resume full operations in the next few weeks.